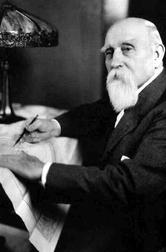 Not very many years ago a traveler, in passing through this country, would have seen a large field of waving corn, occupying

the entire space where now our small flouring city stands. Indeed, so recent is this date that the tracts of the plow still remain on

The City of Williamson is located on the Tug Fork of the Big Sandy River, and on the extreme North-western corner of what is known as

the John Green Grant. This tract of land, containing thirty thousand acres, was granted to John Green by the Commonwealth of Virginia on the

first day of September, 1795. On the sixth day of April, 1835, the heirs of John Green conveyed four thousand acres off the west end of the

original grant, in which Williamson is now situated to Anthony Lawson. On the first day of May, 1858, the ownership was again transferred this

On account of the favorable position of this cornfield, the owners perceived that it would be a suitable site for a town, therefore they had it laid off and sold as town lots. This was the birth of what is now the City of Williamson.

The year following this, the Northfolk and Western Railway Co., in coming down Tug River, brought its main line through the new village. The Railway Company did not realize at that time that this same village would in the near future be a center for all the coal operations and general industrial pursuits in Mingo and the adjoining counties. And therefore, no yards were built here at that time.

In 1894, Williamson was incorporated. Mr. J.B. Williamson was elected Mayor; Mr. E. K. Emmit, Recorder; and Messrs. J.B. Slater, J.E. Acord, Jas Hatfield, C.W. Meyers and W.B. Elswick Counsilmen. thus, Williamson started out in her career as a town and began the management of her own internal affairs, containing at that time only about twenty buildings and less than one hundred inhabitants, a small place indeed to take up the responsibilities of a municipal government.

The people in the western part of Logan County, in which Williamson was then situated, had for some time desired to be separated from the eastern part and therefore a movement was undertaken for the division of the county. The year following the incorporation of Williamson this was accomplished in the western part, being formed into the new county Mingo in which we are living today. There were two contestants for the situation of the county-seat of the newly-created Mingo, Williamson and Rockhouse. In an election, the people of the county chose Williamson as the place in which they would settle their disputes and carry on the administration of their government.

In the year 1900, a school house was built in Williamson. Before this time, the schools were held in almost any place that could be secured for the purpose, now they had a permanent home.

In 1901, coal mines began to be opened up on the Norfolk and Western Railway. The Company now looked about for a Mining Center for all the coal mines in Southern West Virginia. On account of her position and ample room for building the yards, Williamson was chosen. The Company at once began the construction of their yards here and have steadily increased them, adding something every year until now Williamson had the largest yards between Portsmouth and Roanoke, even exceeding those of Bluefield.

A year later, Mingo County erected a substantial, commodious court-house in Williamson. Hitherto, the courts had been held in an old frame building now known as the Vaughan House.

In 1904, the town saw the necessity of paved streets. In rainy seasons, large mud ponds would stand in the streets so that pedestrians as well as wagons and teams had much difficulty in traveling in them. Parts of 2nd, 3rd, and 4th Avenues, and parts of Pike, Logan, and Harvey Streets were paved.

During all this time that had hitherto been referred to, Williamson was steadily increasing in population and wealth and was still a small town. In 1905, she was granted a charter and made into a city.

Owing to the abundance of lumber and comparative scarcity of other building material, the earlier homes of the town were built of wood and very often the city has suffered from disastrous conflagrations. The worst of these fires occurred in the summer of 1906. It swept out almost the entire block running from 208 to 228 on the North side of Third Avenue and from 205 to 227 on the South side destroying in all about twenty buildings and causing the loss of many thousand dollars. In the long run, however as is usually the case in such instances, the result was beneficial to the city for it removed all the old buildings on that street and gave room for new ones to be built.

On account of the scarcity of the building room in Williamson, the owners of that tract of land lying east of the city, had it laid off and sold as town lots. This suburb was named East Williamson. In the short space of two and one-half years, this place has grown into a good sized town. The inhabitants of East Williamson are chiefly employees of the Norfolk and Western Railway Company. The advantage to them of living there is that they are near the place of their work.

By 1907, the number of school children had grown so large that the old building erected in 1900 was unable to hold them all, so a new one was built containing twelve rooms and two large halls.

In this same year, the Norfolk and Western Railway Company completed some improvements that were a great benefit to the city. The main line with many side lines of the railroad running straight through the heart of the city was crossed by many streets which fact was always a source of much danger to foot-travelers as well as wagons and teams and especially to children on their to and from school; but the company constructed a fine system of underground crossing so that now pedestrians can readily get back and forth without any danger of being run down by trains.

In 1908, a fine bridge was built across Tug River by an incorporated company. The object of this bridge was to open up the lands of Kentucky and making another suburb across the river. Not much headway had been made however towards making South Williamson a part of the city.

By an election of April 11 of the present year, the people of the city voted the sale of $47,000 worth of bonds. The proceeds derived from these bonds will be used to pave streets, lay sewers, improve the water system, and to make many other improvements in the city.

Since the time of its first incorporation, Williamson had had nine mayors; J.P. Williamson, C.L Gaujot, Wm. O'Brien, Hi Williamson, A.J. Epperly, L.A. Sampselle, J.F. Keyser, M.Z. White, and A.C. Pinson. Under the administration of the last two, however, the most progress has been made in the city.

Williamson is now a city of about four thousand inhabitants. The city has a fine water system. The water comes from wells sunk in the bed of the river, and to get into them, the water must pass through the sand and be filtered off the greatest part of the sediment in it. The main pipes of the city are six inches and the branch pipes four inches in diameter. The pressure of the water power is from eighty to one hundred pounds to the square inch. With this pressure, the top of any building in the City can be reached in case of fire. Williamson has a volunteer fire company. Hose houses have been placed in different parts of the city so that the fires can be reached more readily than if they were all stationed at one place. It is hoped that the time is not far distant when we will have a fire engine and a salaried fire company.

Williamson has many fine business buildings, some of which are The Mingo County Bank, The First National Bank, J. Levine's Department Store, and Strosnider and Jenkin's Drug Store.

The future for Williamson is very is very bright indeed. If an inhabitant should leave the city now, stay away for about ten years and then visit it, he would be astonished by what he would see. He will see Williamson strung all up and down Tug River for about three miles, all of which will be connected by a fine system of street cars. He will see a fine system of railroad yards. The Norfolk and Western Railway Company will have stretched across Tug River and extended their yards very much. Second Avenue will be the business street of the city with many fine buildings, besides those it already has. In Williamson, he will see an equal to any city in Southern West Virginia.

As written by Okey P. Keadle

A History of The City of Williamson

In 1888, a company of railroad surveyors first broke a path along the Tug River. They were digging into the ground inspecting the heavy forest, mapping out a route for the railroad. The railroad was called the West Virginia and Ironton. Optimist Wallace Williamson lost no time in hiring Thomas Boggess, a surveyor, and had his farm laid out in lots. By the time the railroad was complete, it was called the Norfolk and Western.

Williamson Memorial Hospital, erected in 1918, was named for Wallace Williamson.

The first bus lines in the city was started in 1935 by Henry W. Nickels.

The first school was a log cabin in the area then called "the orchard", in the block which housed the Williamson Sundry Store. The next school was a two-story frame building built on the hill near the corner of Oak and Poplar Street. At this time, around 1901, Williamson also boasted a private school. The Presbyterian Academy first held class in the frame courthouse, which was located, where the Mountaineer Hotel was later erected.

Thomas B. Garner and his wife published the first newspaper, which was a weekly called the Williamson Enterprise. He was also responsible for bringing electricity to Williamson and ran the power company and ice plant in 1900.

In 1903, Third Avenue, from Pike Street to Logan Street, was the first section of town to be paved.

John B. Williamson, brother of Wallace J. Williamson, was elected the first Mayor of the city soon after it was incorporated.

O. W. Evans, then manager of the Norfolk and Western Railways Fuel Department in Williamson built the Coal House Building in 1933 as a result of an idea. The outside walls of the unique structure are constructed of 65 tons of coal from the coal seams in the vicinity of Williamson. It is one of two such buildings in the United States. It stands as a tribute to coal, which brought prosperity to the area.

The Norfolk and Western first extended it lines through here in 1892 and began to revolutionize the economy. Coal mines were developed along the line, and this area is now known as the "Heart of the Billion Dollar Coalfield".

Mines in this area provide coal for gas production and by-products, steam, and domestic use. 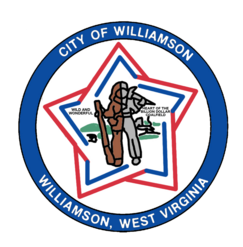